Imagine my surprise when I discovered that the name “fossa cheese” doesn’t stem from a place, let’s say like Parma ham or Modena traditional balsamic vinegar, but from a very peculiar way to mature cheese: into a pit.

Indeed, the Italian word “fossa” means “pit” and I wondered how I had never thought of it before, although I tasted this delicacy several times.

The place of origin of the pit cheese is Sogliano al Rubicone, a village surrounded by rolling hills, half way between the Adriatic sea and the Apennines. We followed the signs at the town entrance and  easily reached Fosse Venturi, one of the seven cheese cellars in Sogliano. 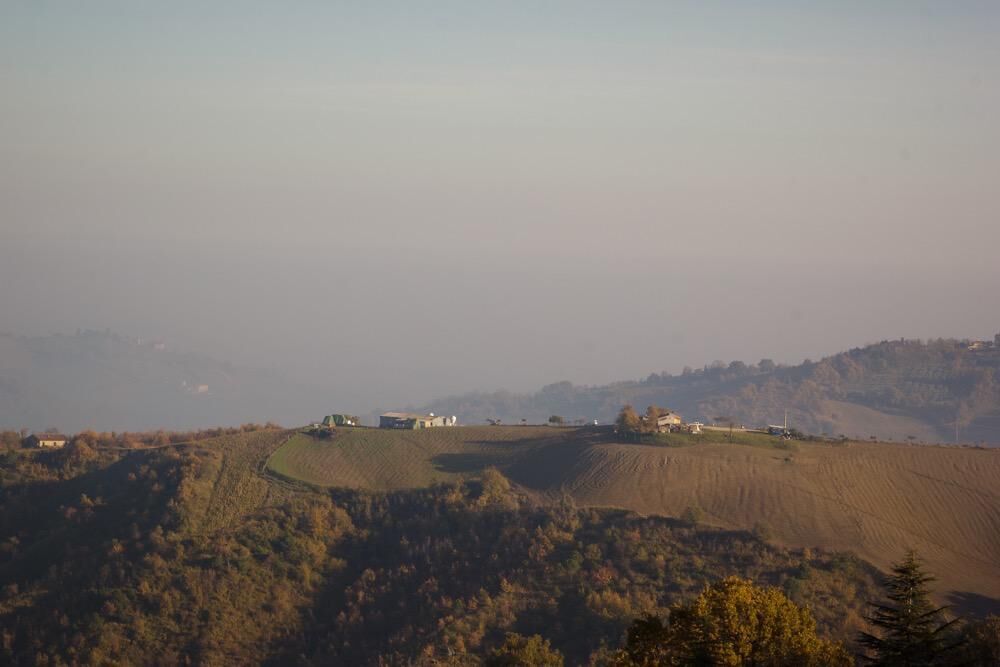 Inside, a strong but pleasant smell (how could that not be?) and several sorts of cheese, together with other local selected products tastefully displayed. A young man welcomed us and proudly started to explain the extraordinary story of a cheese still made following the centuries old traditional method.

Although there’s no proof, the tuff pits characteristic of this area might date back to the Roman Empire era. The pits are first mentioned in official documents in the 14th century as storage rooms for cereals, cheese and other food. They were also used to conceal foodstuffs from the frequent incursions and lootings by soldiers or bandits, and to have a stock in case of food shortage or famine. 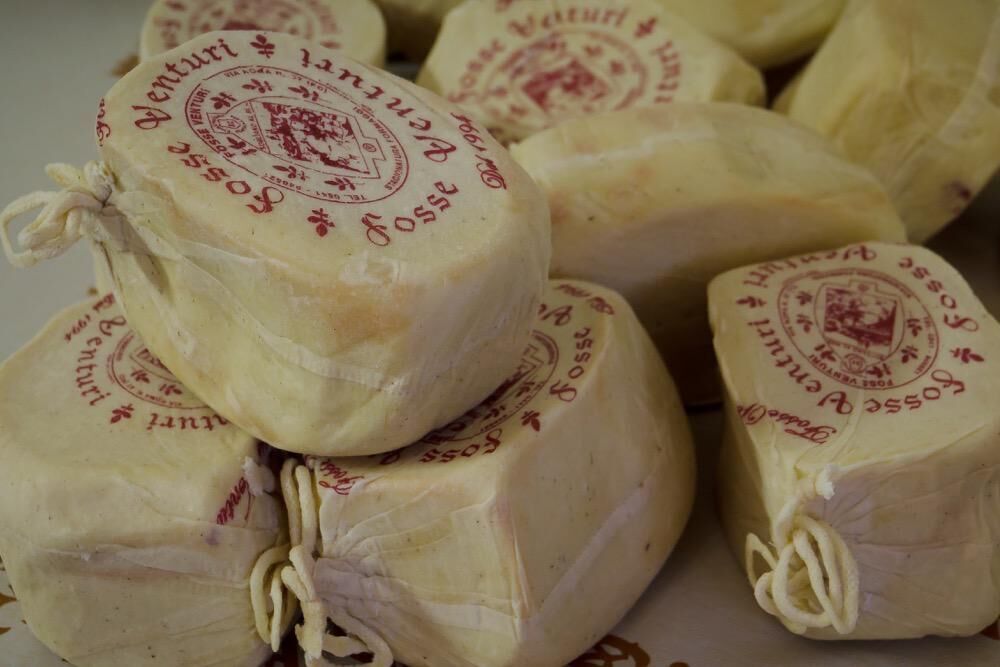 Every year in Summer the local farmers used to come to Sogliano, bringing their cheese to the pit owners to preserve it from the heat, going back in November to gather the buried products, which, meanwhile, had matured and acquired a different and delicious taste.

Little has changed in the way pit cheese - which can be made of cow, goat or ewe milk - is produced nowadays. Since 2009, the Formaggio di Fossa di Sogliano is a PDO (Protected Designation of Origin) product. This means that the herds must be fed following strict guidelines and they have to be bred in a specific geographical areas. As for the maturation, the making of pit cheese requires a long and meticulous process. 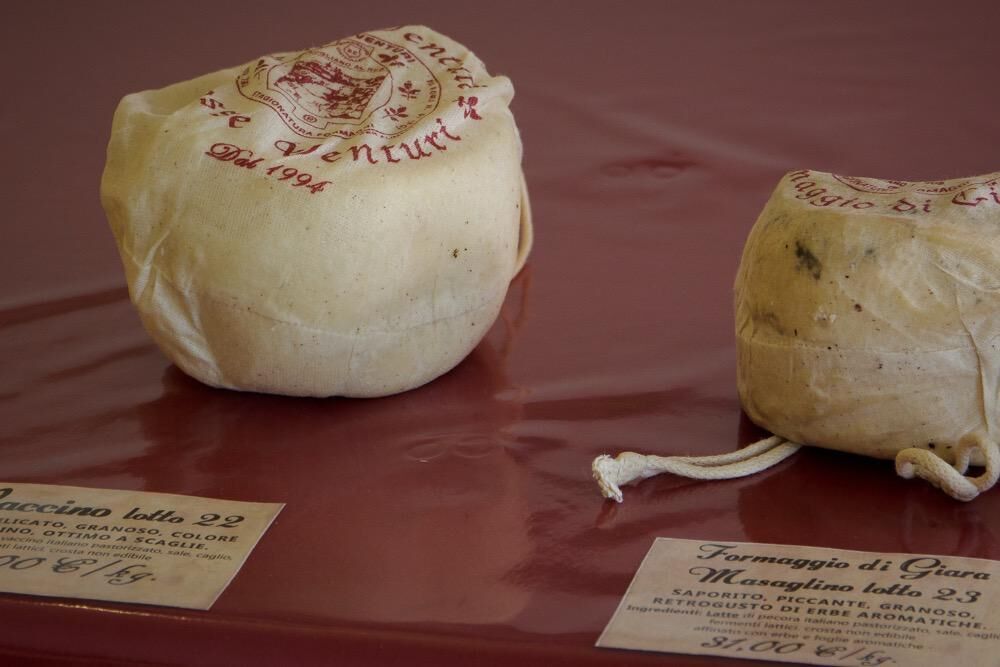 The first step is the preparation of the pits and their sanitization, by burning straws. Then, the well is carefully cleaned to remove any trace of ashes and its walls get lined with a layer of straw and canes.

The bottom of the well gets covered with an elevated platform made of untreated wood; in that way, the cheeses won’t touch the ground and the fat released during the fermentation process will be collected in this cavity.

Once the preparation finished, at the end of August the cheese (each piece previously wrapped in a canvas bag and then collected in larger sacks) is buried into the pit. Once completely filled, the stack is covered with another layer of canvas. Finally, the pit gets closed with a wooden lid, sealed up with plaster and, as a  final touch, covered with sacks of sand stones or other heavy stuff.

Once the pit sealed, cheese is stored for 90 days during which it undertakes an anaerobic fermentation, looses a lot of fat and takes a very peculiar taste, due to the specific temperature and humidity.

The formal opening of the pits and unearthing of the cheese takes places on November 25th, the day of St Catherine, and is celebrated with a festival on the last Sunday of November. 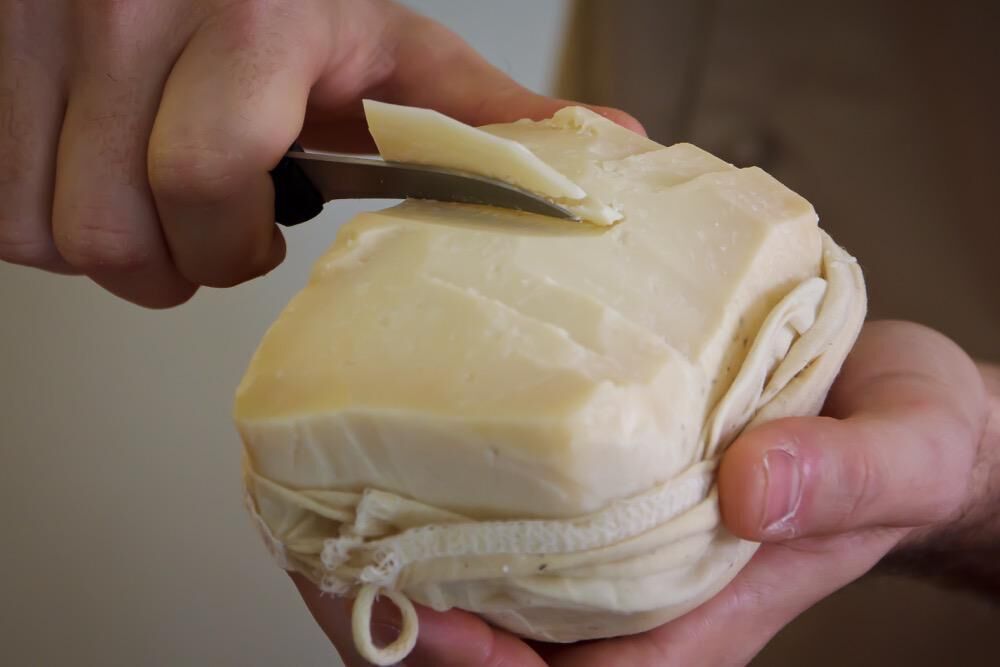 This fascinating explanation was followed by the moment I was longing for: tasting several sorts of cheese, savouring the different flavours, thinking of the possible pairings with a desert wine or a good, full-bodied red.

They’re all excellent, and choosing a favourite is not easy. If I had to elect just one, I’d say the ewe (pecorino) pit cheese!